Dear Customer,
The token Umetaworld ( UMW) has been launched in DE.FI. with an IBCO (initial bonding curve offering). Umetaworld is the token dedicated to Umetaworld. The token was created for the uses described in the whitepaper published on Umetaworld.io (please read the white paper) and can be immediately traded on Pancakeswap. The token that will be launched simultaneously through IBCO and Pancakeswap with the distinctive UMW symbol, has no preminting quotas and therefore it is possible to purchase it only and exclusively directly through the specific BUY button on the Umetaworld.io website for those who want to buy in IBCO by connecting your Metamask account or owning an account on Pancakeswap. As usual in these cases, a few hours after the start of the IBCO and the listing on Pancakeswap, it will be possible to follow the trend of the token directly on coinmarketcap and coingeko. The company that owns Umetaworld anyway does not collect sums from the sale of the UMW token and will only be the recipient of a part of the systemic commissions which are set as a total of 3% of which half intended for burning and the other half intended for the Umetaworld foundation that will use the sums, as foreseen in the white paper and verifiable in blockchain, for the development of Umetaworld, for the marketing and for the foundation’s other purposes described on the Umetaworld.io website To facilitate the purchase by interested parties who are not familiar with Metamask, IBCO and Pancakeswap, DTSocialize Holding, which itself will participate in the purchase of tokens being launched through DTCirclecustody, has created a procedure for its customers in DTCirclecustody itself. Interested parties can then use the "user to user" transfer function to send the amount they intend to dedicate for purchase to the dedicated DTSH accounts:
a) number 531419639 for those who want to pay with euros
b) number 529698606 for those who want to pay in dollars
DTSH will proceed with a cumulative purchase of tokens which will then be distributed pro-quota to the respective buyers in a dedicated wallet in DTCirclecustody that will be open in the hours following the launch of the IBCO and from which users will be able to freely and independently dispose of their tokens including the possibility of sending them to their Pancakeswap account for trading or subsequently request the exchange service from DTCirclecustody itself. It is the first time that we ourselves are going to participate in the launch of a new token in DE.Fi. and we are proud to provide this service for the very Umetaworld token we sincerely believe in.
We are also happy to be able to share this possibility with all our DTCirclecustody customers.

You're now subscribed to our newsletter!

Thanks to our international banks network and strong relationship we are able to increase your savings safety not exposing it to the risk of being held in one single bank branch.

We guarantee privacy and protection on your funds, digital assets, deposits, accounts and transactions.

Deposit your bitcoin in our safebox and use your personal insurance to cover your crypto wallet up to 100 million dollars.

Simply sign up and complete our identification procedure. You will be asked to provide a valid travel document and a selfie holding your document in order to confirm your identity. As a last step we need a proof of address which could be a utility phone or a banks statement.

3. Tell us your needs

Check out through our desktop or
mobile application your own account

Start transfer in and out your selected
fiat or digital currencies

Thanks to our international banks network and strong relationship we are able to increase your savings safety not exposing it to the risk of being held in one single bank branch.

Send and receive your fundseasily and safely

Some text here Simply sign up and complete our identification procedure. Thanks to our online dashboard you will send and receive any assets you desire in a matter of a minute 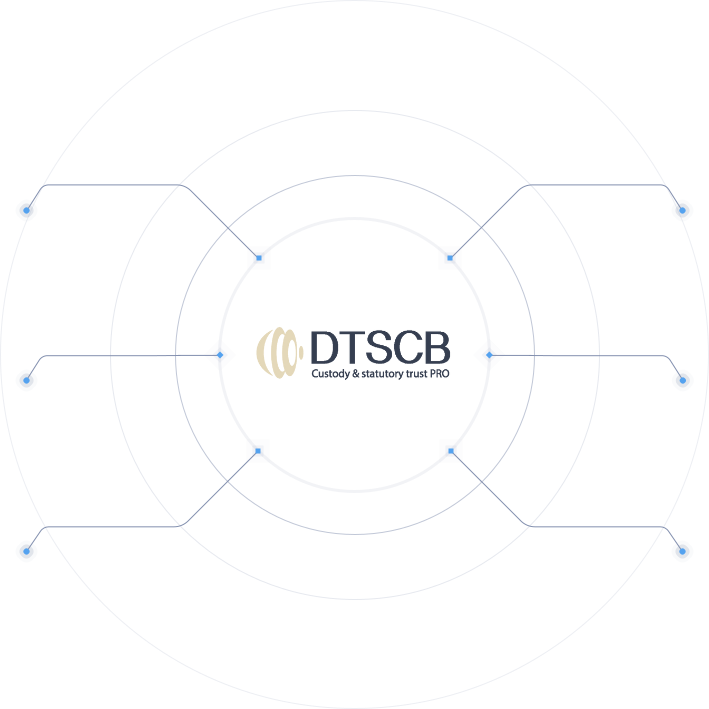 Stop worrying about your bank, let us be your middle man and do the work for you. Every business can have its own account manager which will manage international bank accounts opening, transfers and anything you need.

Do not worry anymore on executing large transactions, no more account blockage or reasons to give, your DTCIRCLE account manager will manage it for you.